The International Symposium on Figurativeness set the scene for the discussion of the use of figurative language in today’s communication. The event took place at the University of Alicante and it was hosted by the GRIALE research group, thanks to the support of the Faculty of Arts and the University Research Institute for Gender Studies (IUIEG), as well as to several research grants awarded by the Spanish government and the Generalitat Valenciana. 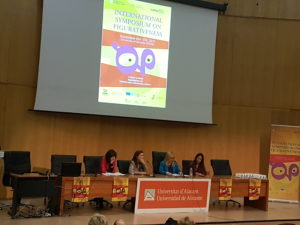 Special attention was paid to the phenomena of verbal humour and metaphor. The first keynote speaker was Delia Chiaro, professor of English language and translation at the University of Bologna.  This renowned humour scholar gave a brilliant talk on the way humour is being used in the digital age and how it affects the reinforcement and subversion of gender roles and stereotypes. We found the way she described humour very interesting. In her words, humour is a cognitive and social phenomenon and, of course, humour is also something that has to do with the emotions and the performance of oneself. 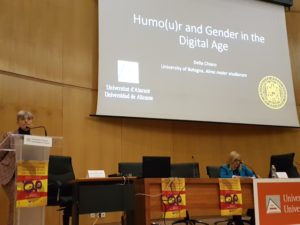 The second invited speaker, Elena Hoicka, from the Department of Psychology at the University of Sheffield, explained how important the development of humour and pretending is for the development of imagination and creativity in childhood. She showed that there were different types of early humour and a real evolution in in children’s humour comprehension and production. According to Hoicka, the use of humour and pretending reflects the infants understanding of artifacts, language, and social norms, as well as their increasingly abstract thought. 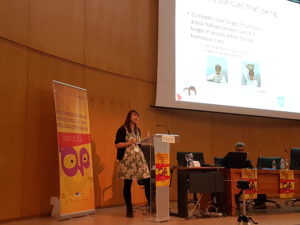 After the lunch break, Annette Myre Jørgensen of Østfold University College presented the COLA corpus, a Spanish spoken corpus of youth language, and presented some examples in which teenagers used humour and figurative language to build rapport with their interlocutor. Using Martin’s humour styles division, the speaker also exemplified those styles in conversational humour with several recordings from the COLA corpus. Then, the evening session concluded with Javier Valenzuela, from the English studies department at the university of Murcia. His study demonstrated that we can actually go from space to time via multimodality. He presented the CREATIME research project, which seeks to understand human creativity by studying how we imagine and represent time. We were all fascinated when he exposed some of the patterns for time that we have in our minds and illustrated these with data from speech and gestures collected in the media. 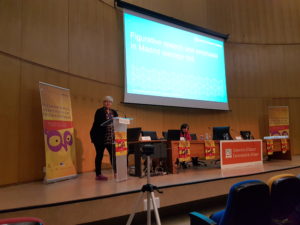 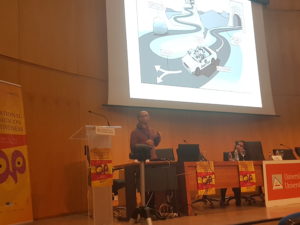 On Tuesday, Cristina Cacciari, psychologist at Università degli Studi di Modena e Reggio Emilia, explained the revision of the interference effect in metaphors and how important distributional properties are for this figurative use of language. She showed that human communication often requires the construction of meaning that goes beyond the literal one. In fact, non-literal utterances are an ever-present phenomenon in our daily communication, which imply a cognitive effort for their understanding. During her inspiring talk, Cacciari discussed the general underlying mechanisms in metaphor comprehension and the role of literal meaning when processing metaphors like “This lawyer is a shark” or “my job is a jail” in which some features of the literal meaning are applied to the figurative one. 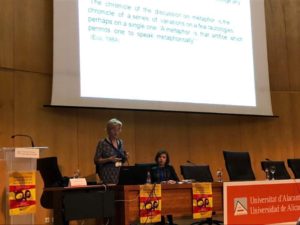 Finally, José Manuel Igoa of the Universidad Autónoma de Madrid, with expertise in Psycholinguistics, Syntax, Neurolinguistics, spoke about how we process the metaphor, with special attention to semantic-pragmatic impairments in its comprehension. In his keynote talk, he showed what involves inferring the figurative meaning when the patients have reading problems disorders. In our opinion, it was a thought-provoking talk as it posed some educational implications. 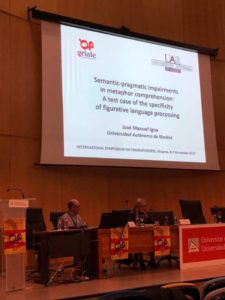 All in all, it was an engaging and enriching symposium, it was an honour to listen to all of their talks and we look forward to meeting them again soon! 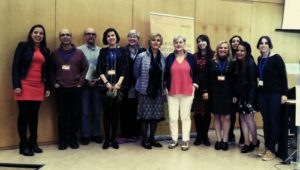 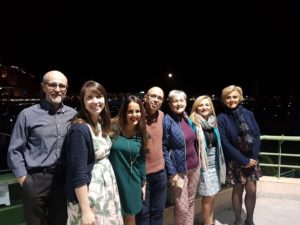 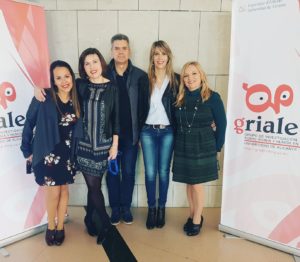